It is getting near to the Christmas festival. Last week I wrote about Black Friday. This week I am following on with the same kind of theme. I hate seeing small children screaming and shouting, stamping their feet and generally having tantrums just because they cannot have what they want. But there are so many of them doing this that I wonder what their parents think and do.

Maybe I am getting old and grumpy but I was brought up during and after the war and many items were rationed. For Christmas I had a stocking which contained an orange, an apple, and some nuts perhaps. Chocolate was rationed but when that was no longer so, I got a selection pack. I was also given a game to play with others or a jigsaw and one main present. There were a few presents from relations but that was all and I was happy.

Why is it that we all want so much? Why do you need a 50 inch screen TV? Why do you want the latest gadget? We are back to needing and wanting and the difference between them. Yesterday a friend told me about the way her children took some old electrical gadgets they no longer needed and exchanged them for something they preferred now. But the new gadget was not a really new one either but had been used before. Is advertising to blame? Do you believe what the adverts say? 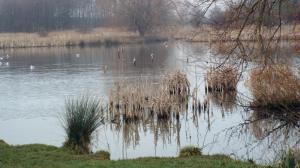 1 thought on “The time of the year”